A wonderful volume appeared late this year, and it’s one you’ll want to put on your Christmas list: How New Is the New Testament?: First-Century Judaism and the Emergence of Christianity, by Donald Hagner (Baker Academic).

The mature reflections of a seasoned and dedicated NT scholar, Hagner’s How New Is the New Testament? offers a straightforward assessment of the current climate of NT studies with reference to its Jewish roots. Hagner traces the historical see-saw between continuity and discontinuity throughout church history and offers compelling evidence that the pendulum has swung too far toward continuity in recent decades. He takes the reader on a fast-paced tour, from Matthew through Revelation, on what is really new in the NT. The author virtually unties the Gordian knot between the New Perspective on Paul and the old perspective, though he comes down, in all essentials, on the side of the old perspective. Hagner weaves a rich and complex tapestry of OT promise and NT fulfillment, the backside of which tapestry has been occupying exegetes for too long. The panoramic view of the NT presented here, written by a first-class Neutestamentler, is beautiful in its simplicity and compelling in its cumulative argument.

Ed Komoszewski was once again my roommate at the annual Evangelical Theological Society and Society of Biblical Literature conferences. Every year, these combined conferences take place over a 7–8 day period just before Thanksgiving, somewhere in North America. This year, it was Denver. These academic conferences are vital for current research and books in biblical studies. Lectures from world-class scholars—both Christian and non-Christian—fill the meeting rooms that span several hotels and the Convention Center. The book area is almost the size of a football field. All the most recent works in biblical studies are there.

Ed comes every year. He has friends who cover virtually all of his costs. It’s not a vacation. It’s work. And it always takes a toll on his body. Weeks are needed for him to recover. In the afternoons and evenings, he can get out of the hotel room. This year he was able to get to only five sessions between the two conferences combined. He also met with publishers, editors, co-authors, scholars, and folks who simply wanted to get with Ed.

He met with everyone who wanted to see him—even some old friends. He talked with them about his faith. They all had a stimulating conversation. However, when Ed got back to the hotel, he was exhausted almost beyond belief. He could not form words properly because he lost control over his facial muscles. His whole face was literally sagging. He looked like he had aged 20 years right before my eyes! I’ve never seen anything like this. I scolded him, and said that he needed to take better care of himself. He needed to not say yes to everything and everyone. But Ed was just being Ed: everyone else is more important, the gospel is more important, and his life counts for naught. I could not dissuade him. 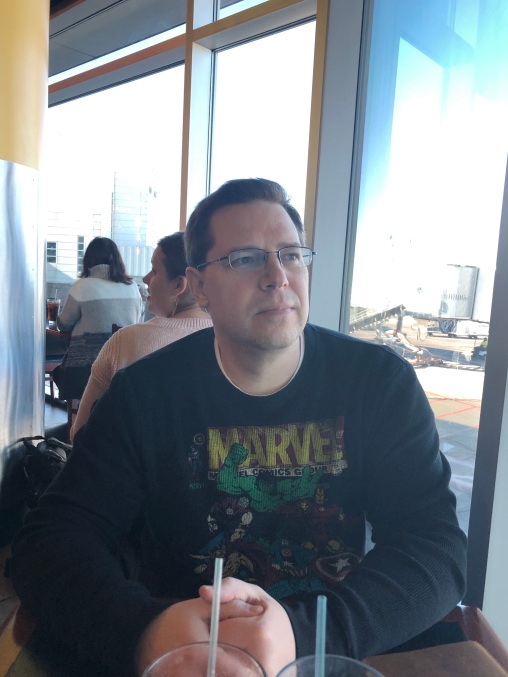 During most afternoons and evenings, to look at Ed you’d swear he was in good health. He works hard to make others comfortable around him. I know the truth. Ed has an invisible illness—or rather, invisible illnessES. By Thursday of last week he hit the wall. Just to get out of bed took extreme effort. At one point he was in such pain that he couldn’t even take his shoes off. His health has continued to degenerate. I have urged him to stay home from the conferences. But he’s far more concerned about making an impact for Jesus Christ than his own comfort or health. I could list a litany of physical issues he faced just on this trip. But suffice it to say that he sacrificed much to be here, and he continues to sacrifice much for the gospel.

I want to thank so many of you for your generous gifts to Ed’s GoFundMe account. Such a great response! Just a few more thousand dollars to pay off the current medical bills. Wouldn’t that be a marvelous Christmas present? This is an investment in eternity. Hundreds of small donations would add up to a big gift. Let’s do this.

Friends, I wanted to share a link with you all about a unique Christmas present opportunity. It’s a way you can both honor friends, family, or those who have influenced you and preserve unique, handwritten pages of the New Testament at the same time. I’ve done this for my parents. Mom went to be with the Lord last January and Dad doesn’t want any more stuff in his life. This is a way to give him a Christmas present that doesn’t clutter his home. (I’m sure he won’t know about this until I tell him.) You may wish to honor a beloved teacher, parent, child, friend, or even an author/speaker who has shown you the importance of the word of God.

Click on the link below to find out how to put the honoree’s name on a special Internet page; the honorees will be listed on Christmas Eve.

11×12 Donation honoring someone in your life