Defining Inerrancy: Affirming a Defensible Faith for a New Generation, by J. P. Holding and Nick Peters, published by Tekton E-Bricks on 22 May 2014, is intended to be a response to Norm Geisler and Bill Roach’s Defending Inerrancy—and so much more. Both have a similar cover and similar title. Defining Inerrancy, however, is a gloves-off defense and affirmation of a version of inerrancy that many are not acquainted with. That is, many except those who are Old and New Testament scholars. 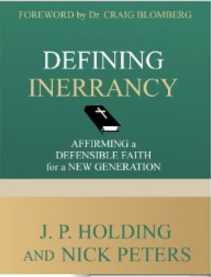 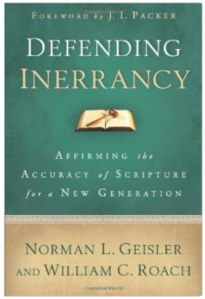 Defining Inerrancy also interacts heavily with Norm Geisler and David Farnell’s The Jesus Quest, a book published just last March. The info on Amazon says that the eBook is the equivalent of 98 pages long, based on the number of “page turns” on a Kindle. A preliminary Word draft of Defining Inerrancy, sent to me by the authors, weighs in at just 74 pages. It’s a one-evening read, but it will be an evening very well spent.

Even though only an eBook so far, this little volume addresses some of the most pressing issues within American evangelical circles that have been brewing for more than four decades. And it comes with a Foreword by world-renown Gospels scholar, Craig Blomberg, giving the book instant credibility.

The booklet has fifteen short chapters and no footnotes or endnotes (but some, though not entirely adequate, in-text notes).

Blomberg’s Foreword, in the opening paragraph, lets the readers know that Norm Geisler has recently been attacking his evangelical orthodoxy. As one reads through this book, they will discover that it is in many ways a response to Geisler’s campaign to rid the church of what he perceives to be bibliological heretics. Inter alia, Blomberg gives a laundry list of evangelical scholars who have been the victims of Geisler’s acidic pen: Robert Gundry, Murray Harris, Clark Pinnock, John Sanders, Darrell Bock, Michael Licona, Craig Blomberg—and even the entire Evangelical Theological Society (a group which, according to Blomberg, Geisler referred to as ‘liberal’ and the “Former Evangelical Theological Society”)! And Blomberg does not mince words. Penultimately, Blomberg commends this book as follows: “…if Geisler has already misled you on any of these topics, read these chapters carefully so that the record may be set straight.”

Indeed, that is an apt summary of the book. The authors set the record straight on Geisler’s increasingly marginalized approach to inerrancy. Many would regard Geisler as the spiritual heir of Harold Lindsell, a man whose books The Battle for the Bible and The Bible in the Balance bitterly divided evangelicals nearly four decades ago. But I digress.

The major issue that Holding and Peters put forth is that within the inerrantist camp are ‘traditionalists’ and ‘contextualizers.’ Traditionalists claim that the Bible should be read essentially literally and that unless there are clear in-text clues that something is to be taken otherwise, the reader is to regard the text as literally true. Contextualizers see things differently. They would argue that genre, comparative literature, and other extra-textual features are often important keys to understanding the meaning of the text. The book focuses on the Gospels and narrative. Here, it is claimed, traditionalists view the narrative in the Gospels as historical, while contextualizers view it as imbibing, at times, in more than one genre. And even then, this does not necessarily mean that such is not historical. Even though many traditionalists would claim that, for example, dominical sayings are always exact quotations of the Lord (known as ipsissima verba), contextualizers claim that this is not only not in keeping with ancient historiographical reporting but also involves exegetical gymnastics that defy logic.

The authors put forth their thesis rather boldly:

“inerrancy requires a contextualization of the Bible as both the superlative literature that it is and as a document; and that the ‘as it stands’ readings frequently (not always) decontextualize the Bible, reading it as a text out of time, and therefore without respect to critical defining contexts during the time of its writing.”

“… the perception of ‘inerrancy’ offered by the old guard is dangerous, misleading, and obscurantist in that it will result in a view of the Bible that is not defensible or respectable, leading us down a path of endless epicycles of explanation, artificialities, and illogic. The end result will be to bring down scorn on the Christian faith and contributing [sic] to its demise in the Western world.”

This should be enough to pique the interest of any reader! As astounding as their statements are, I think they are spot on. But one will have to read the book to see whether they make out their case.

I will simply note two refrains that the authors make. First, though the Bible may be inerrant, our interpretation of it is not. This would seem to be obvious, yet repeatedly they show that Geisler sets himself up as the arbiter of truth—including true, inerrant interpretations. And this is one of the great divides among evangelicals today. Ironically, though there are many near-consensus interpretations of a number of passages among evangelicals, to hold up a particular interpretation as the true interpretation is to place tradition above the text. And this cuts directly into sola scriptura—the sufficiency of scripture as our final authority. Geisler and other traditionalists tend to claim that any view that does not see the Gospel narratives as utterly historical is not compatible with inerrancy. Yet—again ironically—many traditionalists claim that the Church has from its beginning embraced inerrancy. But if so, it is certainly not the same inerrancy that is embraced by traditionalists.

A case in point (not mentioned in the book): several church fathers, whose bibliological credentials on the New Testament at least were unimpeachable, claim that Jesus’ healing of the blind man in Mark 8.22–26 was not historical. This is one of two miracles of Jesus recorded in Mark that are not found in either Matthew or Luke. Both of them involved Jesus using spittle (the other is the healing of the deaf-mute in Mark 7). Jerome says that the story is “not historical, but symbolic.” And Ambrose, the bishop of Milan in the fourth century, saw the spittle as a symbol for the washing away of sins in baptism.

Nevertheless, these hoary authorities of old were probably wrong. It is instructive that through the route of historical criticism these two pericopes have become seen as among the most likely historical events in the Gospels—and for the same reasons that Matthew and Luke probably excluded them and the church fathers spiritualized them. Why was that? Embarrassment. Most Gospels scholars today, both evangelical and liberal and everything in between, regard a saying or act preserved in the Gospels that would be potentially embarrassing to the church, as having the marks of authenticity for this very reason, for no evangelist would create such out of whole cloth.

Second, the authors make the case that elevating inerrancy to the level of, say, the resurrection of Jesus, puts one’s whole belief system in jeopardy. Toward the end of the book, they make this case as follows:

“Blomberg also offers us, Geisler says, the hideous (!) statement that if there were a few genuine contradictions in the Bible, the rest of the text would not be jeopardized and the entire case for belief would not be called into question. Yes, this is one of those dangerous views of Scripture that says that if the Bible is not inerrant, then Jesus did not rise. How far would it go? Would we say Jesus did not even exist if we find there are mistakes in the Bible? Actually, there are some professed former Christians who hold to this position, and their questioning of the Bible started with them having been in a position like Geisler’s as confessing Christians.”

This view—making inerrancy as important as the resurrection of Christ—is part of a mindset that does not differentiate among doctrines. I call it the domino view of doctrine. When one falls down, they all fall down. I have taught for years that it is one of the main reasons why some conservatives become “liberal.” I put “liberal” in quotes because often such people are not really liberal; they are still fundamentalists, just on the left side of the theological aisle. They still see things in black and white, but now are skeptical about the supernatural and anything that smacks of biblical authority. Darrell Bock speaks of such a mentality as “brittle fundamentalism.” And he sees it as shattering when it comes in contact with the sophisticated polemics of the left.

In Defining Inerrancy, the authors note that they have known many evangelicals who have abandoned the faith precisely because they started out with such a hardening of the categories. This rings true: I get countless emails from people who have either jettisoned their beliefs (or have friends or family members who have) because their starting presupposition was that it’s inerrancy or nothing. Such people would throw the proverbial baby out with the bathwater! And it is this very problem that one of the architects of modern evangelicalism, Carl Henry (who could hardly be condemned as being soft on inerrancy!), addressed in his book, Evangelicals in Search of Identity. It seems that many evangelicals are still not listening. And yet Henry saw, forty years ago, that the evangelical church was making inerrancy the litmus test of orthodoxy to its discredit. Yet again, I digress. Holding and Peters are not in the least denying inerrancy; they are simply rejecting a rigid form of it that they see as dangerous to the health of the evangelical church.

In sum, Defining Inerrancy is a book far more important than its size would indicate. It defines not only inerrancy but a yawning divide within evangelicalism. My hope is that traditionalists will not dismiss it out of hand (as they have so many treatments coming from contextualizing inerrantists), but will indeed wrestle seriously with its contents. Sadly, I’m not holding my breath.

116 thoughts on “Review of Defining Inerrancy”